Posted by IsharaData on March 12, 2017
It is importnt to understand the different states of an EC2 server instance which can initially be a little confusing. The server can be in 3 main states or a number of transition states: 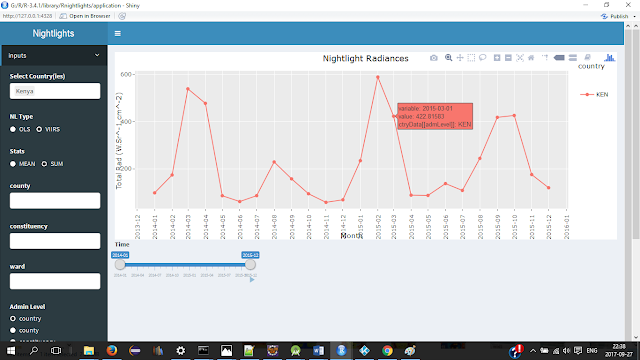 Edit: 2017-11-26 Updated example Edit 2: 2018-10-22 New version + Updated example Note: For any comments/assistance with the Rnightlights package it may be easier to post on the package page https://github.com/chrisvwn/Rnightlights/issues Satellite imagery is increasingly being used in data science to complement or take the place of other data sources. The fact that satellite data are unbiased, have a high spatial resolution, are collected frequently and can be obtained at low cost make them attractive. Nightlights are satellite data that are collected by light sensitive instruments mounted on satellites orbiting around the earth at night to capture the artificial light generated on the surface of the earth i.e. light that is not from the sun or other natural sources. The nightlights are collected and made available by USA’s NASA (National Aeronautics and Space Administration) and are available at different time resolutions from annual, monthly and most recently daily. Nightlig 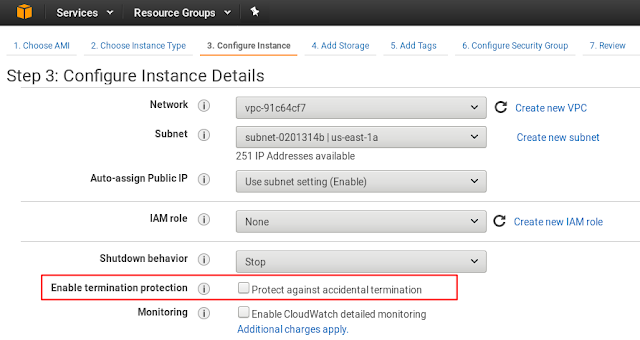 Accidental termination usually occurs when one is still new to AWS EC2 and mistakes termination with shutting down. (See this post for a summary of the EC2 server instance lifecycle). It may sound trivial but it can be a painful mistake - once terminated neither the operating system, nor software, nor data can be recovered - everything is flushed down the bit black hole. There are 2 options that can save you from donating your hard work to oblivion. 1. Set Termination Protection On With termination protection on a server cannot be terminated but can be shut down. You must turn off termination protection to terminate the instance. Termination protection can be set up during or after server instantiation. Enable termination when configuring the EC2 instance 2. Disable the Volume Delete on Termination Option Where you have critical information on your attached root volume, you may want to disable the option to delete the root volume when the server

This is a writeup on some code (read hack) that we had to put together quickly to solve a problem. That is exporting data with multiple headers and merged rows/columns in the headers from an R Shiny datatable. Shiny datatables (Shiny/DT) which is based on (datatables.net) is a fantastic way to quickly display tabular data in an R Shiny web application and to export it to multiple formats. The changes required to try out the code are posted on the shiny/DT github issues page (here) and we thought we would just publish here for anyone who might want to give it a go and maybe even expand on it. Hi all, This is an extension of lisarush 's and dfader 's code over at (https://datatables.net/forums/discussion/40854/how-to-add-second-footer-to-print-in-tfoot?) to get multiple headers to work in csv, xlsx, pdf and print. I also have added a basic merge working for colspan and rowspan headers in xlsx. It does not work in firefox but does in chrome and opera browsers and I d